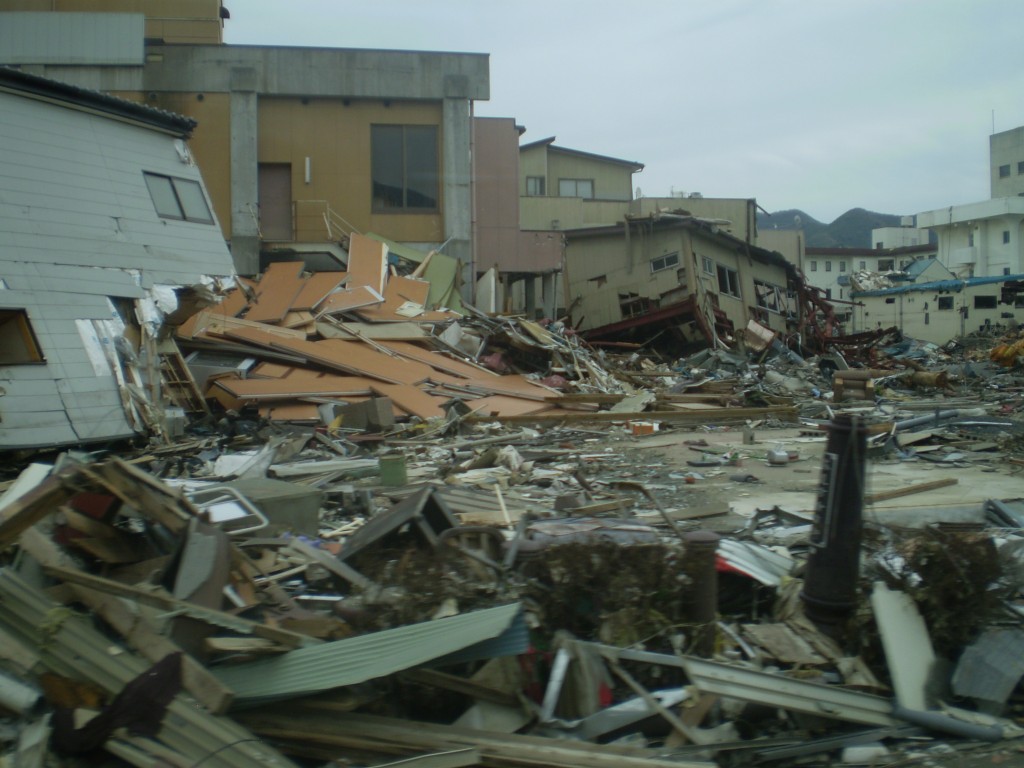 I was asked to join a team of visitors from the World Council of Churches to tour the affected region of the March 11 triple disaster in Japan. It took place between May 9 and 14, 2011.

The most intriguing to notice first was near total absence of Caucasians in the flight bound for Japan. This was the first time for me to see the Air Canada flights to Tokyo only two third filled enough space to stretched out to sleep. Likewise Tokyo streets were almost devoid of white faces. My nephew who works for the Nissan Motors told me that all foreign employees went home.

In contrast to the absence of foreigners, outside of the affected region, life was normal. Azalea that lines every street was in full bloom. Lights were slightly dimmed and a quarter of escalators were not operating – an attempts to save energy. Billboards were everywhere saying, “Courage, Japan! We will recover and rebuild!”

To be sure, the destructive power of the earthquake was unprecedented. The Prime Minister Kan termed it, “The most serious since the Second World War.” The rough figures of total victims, at the time of our visit, were about 13,000 confirmed dead, 9,000 still missing, and 150,000 in the temporary shelters. However ruinous the above figure may be, it pales the unfolding damage by the nuclear accident in Fukushima, because its enormity is still unknown.

The most up-lifting event in the affected region was the frequent visits by the imperial family. The Emperor and Empress, and the Crown Prince and Princess, knelt down on the floor to talk to the evacuees who were sleeping on the gym floors for two months. Another important visitor, almost as important as the imperial family, was Placido Domingo. He was the only foreign artist who did not cancel the scheduled concert tour. He was truly a huge star everywhere he went, and made the audience weep with gratitude.

The first place we went was a small United Church of Christ in Japan (Kyodan) building in Ohfunato of 100,000 people. The city lost all of the commercial and industrial sectors by the tsunami. Visited next was Rikuzen Takada, a bedroom community next to Ohfunato, a population 80,000. It was completely wiped out. Only remaining buildings were schools, used as evacuation centres. Thousands of survivors were staying in the shelters in Ohfunato sleeping on the floors of gyms and schools. Many were still missing.

The young pastor at the church was newt in the community. The church building was next to the community hall housing a few hundred people. The pastor confessed that he was a complete stranger to this kind of social ministry. He was trained to teach the Bible and preach the Gospel. However, he surprised the visitors how quickly he had gained insightful wisdom. 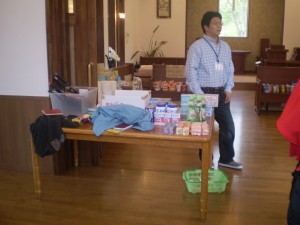 He pointed out how costly gifts-in-kind were. It costs money and person time to collect, transport, and distribute the goods. How often inadequate and inappropriate many of the donated goods were. He realized that cash donations cost little and were flexible and efficient. It is good for the local economy too. He also predicts enormous social problems soon created by a sudden gap between the have’s who did not encounter tsunami, and the have not’s, who lost everything. He also mentioned PTSD as a major challenge facing the community. People are traumatized.

After Ohfunato and Rikuzen-Takada, we went to Sendai, a major city in Tohoku (North East region). What a beautiful city! Tall evergreen trees line the streets, and cherry blossoms were in full bloom, a month late from Tokyo. We visited the Tohoku District Office of the Kyodan where the Christian Alliance Disaster Relief Network is located. This organization was doing excellent work in relief, counselling, and coordination of volunteers.

We also visited Sendai YMCA, which was an important centre as a temporary residence for dislocated people, a distribution centre for relief good, and coordination of volunteers. At the end of our stay in Sendai, we visited the Anglican Diocese office housed in the Cathedral. Cathedral itself is off- limit, as the building could have been damaged structurally. However it is interesting that most of the high-rise buildings were not damaged even after the 9 magnitude earthquake.

We went to see the Sendai coastal plain which was a mixture of farming, residential, and recreational areas. It was totally wiped out. Only a few houses remained standing. We met many volunteers helping people to clean up their homes. Tsunami was stopped by the highway, which boarders the costal area and the city centre. Many damaged cars were piled up at the foot of the highway. We were told that many drivers were caught by walls of waters and drowned or suffocated. It was also a recreational areas for the city people with beaches and parks, eateries and stores. Parks were now used to dump the debris.

It will take the whole of this year to clean up. It will take more to rehabilitate displaced and traumatized people, and it will take decades to rebuild Tohoku (North East). It is estimated that the estimated cost will go over $50 billion. The cost of the accident at the nuclear power station is unknown, because it is still unfolding disaster (probably a few more billions.) But Japan will recover. Spirit is strong. Solidarity of the global community is firm.

2 thoughts on “CANADA/JAPAN: I VISITED THE DISASTER AFFECTED REGION, 2011”