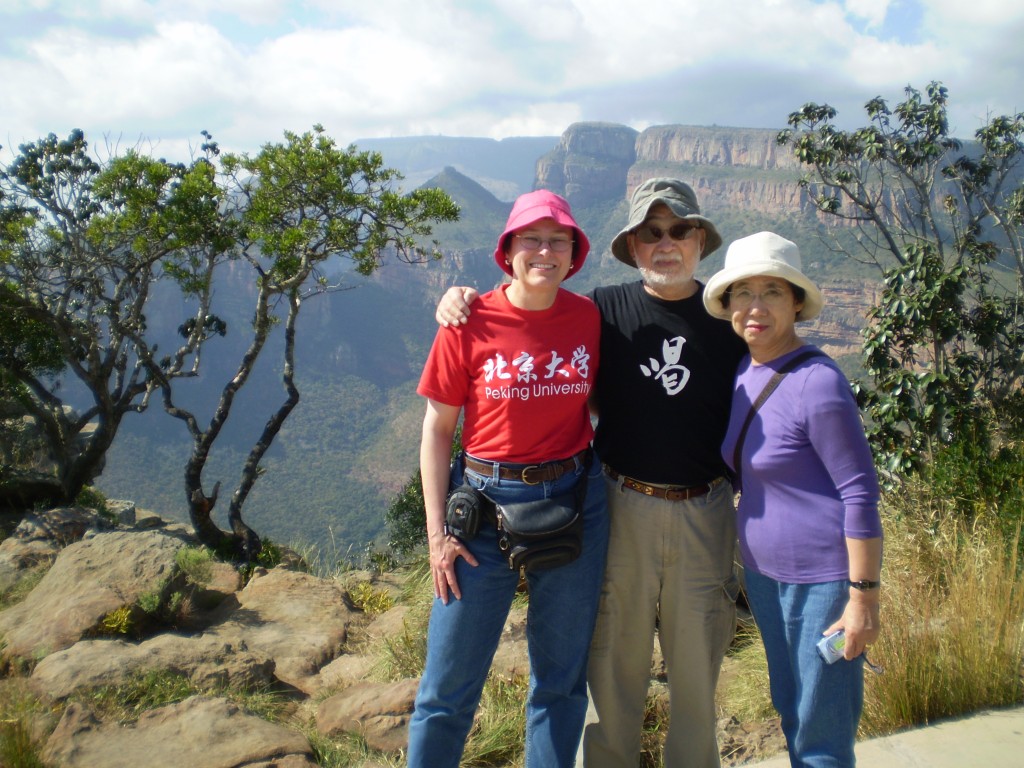 Thank you for visiting my website.  There are seven categories. 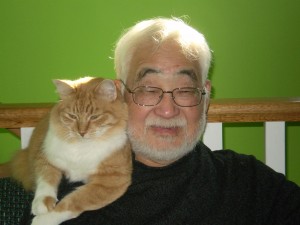 The photo on top is my spouse Muriel on the left and my sister Taeko on the right taken in South Africa.  Picture on the right is me, Tad Mitsui and my cat, George.

Feel free to borrow or quote any part or whole of any article.  .  Giving me a credit will be nice.  Thank you.

WALKING WITH THE FOLLOWERS OF JESUS: 1968-1990
For me, following Jesus means to join the company of his followers. I cannot do it alone. I am not brave. I witnessed the martyrdom of those who followed Jesus as they fought for justice in Palestine and South Africa. But I am like the Roman centurion who watched Jesus die on the cross from a safe distance and said, “This man was innocent.”

The people I accompanied were following Jesus in varied ways. Some were agnostics, humanists, Christians, or Muslims. Regardless of different labels, they were moved by the same spirit. Like the centurion who might have been a pagan, they reached the same conclusion as Jesus’ followers. They gave themselves entirely to the cause of justice, love, and peace – salaam – shalom. When a theological college awarded me an honorary degree, I did not feel worthy. I accepted it to celebrate those followers of Jesus I had known and named them in my acceptance speech. I am a witness to those who paid the ultimate cost of discipleship.

People must wonder if I am a reckless adventurer seeking excitement by being involved in the struggles of Palestinians and South Africans. It was not like that. I took the job that came my way, and realized the price of the choices I had unwittingly made. Nevertheless, I wanted to run every time I came face-to-face with harsh reality, like Peter did.

We went to Africa because, after eleven years in my first pastoral charge, I wanted change. I applied for an overseas posting with the United Church of Canada. Norman McKenzie, the personnel officer of the Division on World Outreach, asked me, “Africa or Asia?” I said “Africa.” He asked, “Lesotho?” I had never heard of such a country, but I said, “Yes.” That’s how I stumbled into the struggle against apartheid in South Africa in 1968. Was I seeking an adventure? No.

Lesotho is a tiny land-locked mountain kingdom surrounded by South Africa. The Paris Missionary Society of French Reformed Churches requested the United Church of Canada to recruit an English speaking person with a graduate degree in Theology. After a few months of orientation in Paris, we went to Lesotho where I met extraordinary colleagues and students. Some of their names you may recognize and others not, but each of them were equally committed to the struggle for justice.

Who were my colleagues and friends? Desmond Tutu was my colleague in Theology at the University of Botswana, Lesotho, and Swaziland. John Osmers was the chaplain of the Student Christian Movement. Another colleague, Anthony Gann was already prohibited to enter South Africa. The university had many South African students who were activists in the Black Consciousness Movement created by Steve Biko. They came to avoid racially-segregated university education. One was Njabulo Ndebele, who later became President of the University of Cape Town. Another was Jama Mbeki, a brother of the second President of free South Africa, Thabo Mbeki. Jama simply disappeared from the campus in 1971. To this day, nobody knows what happened to him.

Others died in the struggle. In 1976, Mapetla Mohapi was found dead in a prison cell in King Williams Town. He was probably killed while being tortured. Police were trying to find the names of overseas financial supporters of the Black Consciousness Movement (BCM), of which the World University Service (WUS), my later employer, was one. Mohapi was the treasurer of BCM. His wife, Nohle, wrote to me that it was the worst possible time for her. Their first child was just born and they just had a roof repaired. Griffith Mxenge, who was a lawyer for the BCM, was found shot dead on the street a few months after he and I had a meeting in Lesotho to discuss administrative matters. A year after Mohapi’s death, Steve Biko was beaten to death in the same prison. The whole world knows what happened to Steve Biko. But there was no real difference between those who lived or died. Following Jesus means one accepts the risk, the roll of the dice.

Two of my friends, both Anglican chaplains, John Osmers and Michael Lapsely, were nearly killed by parcel bombs. They lost a few limbs but survived. Abram Tiro was blown to bits in exile in Gaborone, Botswana, with a parcel bomb. The bombs were sent from Geneva, most likely by Craig Williamson who I had thought to be my good friend. He pretended to be a refugee. In 1980, Craig was exposed to be a spy for the South African Police. Sometimes following Jesus means you may run into Judas.

In January, 1971, I was detained at the Detention Centre in Johannesburg Airport while returning from a conference in Tanzania. Thereafter, I was expelled and prohibited further entry into the Republic of South Africa. At the time, I had no idea why it happened to me. I was not looking for trouble. I had not done or said anything subversive.

I stayed in Lesotho for five more years not being able to leave the land-locked country. Dentists were available only in South Africa. I had to ask someone to take my car into South Africa for service. To go outside of the country, I had to fly via a South African airport where I was required to be escorted by Canadian embassy staff. It became impossible to send my daughter to an English language secondary school outside of the country. We had to leave Southern Africa.

I took up a position in the World University Service (WUS) International Headquarters in Switzerland. It enabled me to continue working with the same people in Southern Africa. I administered funds to support the work of those who were engaged in the struggle for the freedom in South Africa. I always flew to Lesotho to meet with my partners from South Africa as I was not allowed in. And I came safely home while others stayed to pay a price.

While still in Lesotho, I asked the Canadian Embassy in South Africa to discover the reason for my detention and expulsion. It took several years. Initially, the Canadian Embassy in Cape Town dismissed my request for inquiry. This was how their letter began, “As a Canadian of non-European origin, etc., etc.” It sounded as though I did something wrong and Canada had two-tier citizenship. There was a strong protest from the United Church of Canada, spearheaded by Garth Legge, General Secretary of the World Outreach and my home Conference of British Columbia. Mitchell Sharp, the Minister for External Affairs, finally apologized and informed me that it seemed the South African authorities saw me as undesirable because of the kind of colleagues and friends I had. I didn’t choose them: they were there when I got there. Following Jesus can place you among the outcasts.

I have also met brave people in Palestine when I worked for the Canadian Council of Churches from 1979 to 1990. Part of my job was to represent Canadian churches that supported the Middle East Council of Churches. Also, for three months in 2003, I joined the Ecumenical Accompaniment Program of the World Council of Churches and lived in the West Bank village of Jayyous. One day, some farmers were prevented to go to their fields by a barricade and curfew, leading to a tense encounter between them and Israeli soldiers. Many young Israeli peace activists and my co-workers in the Accompaniment Program rushed to be with the farmers to provide them safe space. There was tear gas shot into the crowd. Where was I? I ran away to wash my eyes with a raw onion, an antidote for tear gas. I had to face the fact that I was not brave. Following Jesus teaches you humility.

I met many brave Christian Palestinians in Gaza Strip and West Bank, including Constantine Dabbagh, Doris Saleh, and Albert Nursy. They were the members of the Refugee Service Committee of the Council of Churches. Another was Emil Aghaby, a wealthy businessman who volunteered to administer the Middle East Council of Churches’ program in the refugee camps in Lebanon. He was later found shot dead on the road. They were all well-educated, middle-class Palestinians. By the 1980s, most middle-class Palestinian Christians had left for safer living conditions in other countries, and their numbers dropped from 26 to 5% of the total Palestinian population in the Holy Land. But my colleagues stayed behind to help those who could not migrate. Many traced their ancestry to the original Christians: the original followers of Jesus.

Saying “yes” to Lesotho changed my life. By chance, it set me on the road to South Africa and to Palestine. And on the road to Emmaus. The encounters on that path taught me many lessons. Those with whom I walked paid a heavy price. I am a witness for them.

HOW WE REMEMBER THEM

Problem is those guilty are remembered because they were white Europeans. The people who fell victims of inhuman acts were often forgotten because they were from other racial groups. John Newton was a slave ship captain for almost entire life but he is remembered lovingly just because of the hymn he wrote “Amazing Grace.” He wrote it later in his life after he became an abolitionist. However, does anyone remember his victims and recorded the names of those who were kidnapped and separated from family, chained and traded like animals, and during the storm thrown into the ocean as cargo in order to save the ship? Rendered nameless is the same as murdered but worse because they are not remembered.

I was once gullible enough to send more than $200 and spit as DNA sample requesting an information about my origin. After a month the result came back. I found that I was an East Asian and my ancestry came from somewhere North of Malay to the Northern Hokkaido island; West of Mongolia to the Eastern edge of Honshu Island of Japan, the area bigger than North America. Of course I knew that without paying 200 bucks. I guess they did not have data for a person who looked like me. Isn’t this called Systemic Racism?

We need a new system where every human is remembered by name. However we have a problem. We don’t have record. System had not thought to count everybody worth remembering, like thousands of children buried unmarked under the ground of former residential schools. They were priceless beloved children of parents and community. They all had names. I can not imagine the sleepless nights of agony waiting for them to come home, who never did.