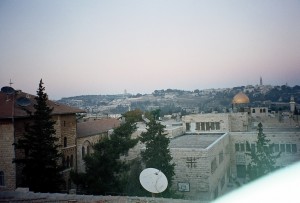 A view of Jerusalem from the Mount of Olives 2003

10th ANNIVERSARY OF THE INVASION OF IRAQ

It has been exactly ten years since President G. W. Bush, ordered the invasion of Iraq. I am surprised how little attention is paid to the anniversary.  Perhaps it was such a colossal fiasco that nobody wants to remember.  It cost more than $ 1 trillion which could be an origine of today’s economic woes.  How can it not be: It’s a lot of money.  It killed thousands of American and British soldiers not counting hundreds of thousands of Iraqis.  Canada didn’t join the coalition.  I am happy Mr. Harper was not the Prime Minister then?  He accused Mr. Chretien of betraying the best friend by refusing to join.

In March, 2003, when the invasion began, I was ready to get on a plane to fly to Tel Aviv for a several months’ assignment.  It was the World Council of Churches’ human rights watch program.  But I couldn’t leave as scheduled because the insurance company charged an exorbitant premium for war coverage.  Remember Saddam’s Scud missiles?  The church could not afford it.  Eventually a reasonable insurance policy was found.  Still there was a  problem: the insurance covered Israel but not the West Bank and Gaza.  By then I was already there.  So I had to be pulled back from West Bank to Jerusalem to wait until the policy that covered the Palestinian territories was found.  It was strange because suicide-bombers struck in Israel, not in the Palestinian territories.  I was safe in Palestine.

Another irony was that the result of the war in Iraq was a Shia government in Baghdad.  Shia is a religion of Iran, an enemy of Israel and America.  When in the Middle East, you can’t help but see the major divide in Islam.  It is the division between Sunni and Shia.  It  is as deep and old split as Protestants and Catholics divide.  It is the Shi’ites from Iran who support Hezbolah in Lebanon and Hamas in Gaza to fight Israel through terrorist surrogates.  But Mr. Bush’s Iraq war gave the power to a Shi’ite government.

Our policy makers often don’t know the subtlety of Middle Eastern politics.  Neither do insurance companies. Yogi Berra said: “If you don’t know where you are going, you don’t get there.”  It’s good we got rid of the murderous butcher, Saddam Hussein.  But did we get where we wanted to go?