HE DIED BUT CAME BACK TO LIFE

My mother died at the age 96.  She was not ill: she dies in her sleep.  She was happy until the end, but she was tired and wanted to rest.  If she was offered a chance to live forever, she would have probably said “No thank you.”  What was the point of the belief in Life Eternal for my Mom?  What is going to happen to the traditional faith now?

Paul declared that the faith without the resurrection of Jesus is useless. (I Corinthians 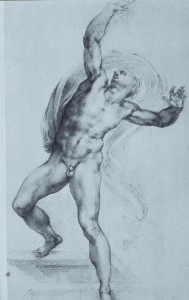 15:12-14)  Really?  I believe in the resurrection of Christ, yes, but I don’t believe he came back into his physical body and returned to this world.  For me, death in the Bible signifies ultimate despair, and the message of Risen Christ means a victory of faith over hopelessness.  A quick survey of the passages of the Bible about the dead coming back to life has proven that point.

(The picture on the right is a drawing by Michelangelo,    “Risen Christ.”)

Throughout history, humans have been driven by three kinds of fear: the fear of hunger, of death, and of extinction of species.  Now that we are getting ever closer to the resolution to all those catastrophes, thanks to progress of science and technology, the relevance of traditional beliefs are rapidly becoming redundant.  We are no longer so afraid of them as our ancestors use to be.  Then the question is: is the belief in resurrection really that important?  Let us re-examine the meaning of the resurrection of Jesus the Christ when we are not so fearful of death and not so attracted to longevity as before.

In fact, the situation often is opposite today.  Food, for example, is plentiful today.  If we achieve justice at home and abroad universally, we will have a capacity to eradicate hunger altogether.  Irony is: the problem of food in our society is opposite of want: we suffer from availability of too much food and from over consumption of it.  In fact, we are killing ourselves by eating too much cheap food.  Obesity is now our major health hazzard.

Thanks to the progress in medical science and technology, our life-span has more than doubled in less than a century.  Because people now live so many more years, the problems relating to aging is our most important challenge: we live too long.  For many people death can be a relief.  Of course, death of the infants and the young must be avoided at all cost.  But it is possible for everybody to live to ripe old age. In my last pastorate, for five years I hadn’t had a single funeral which was not a relief, a relief to the deceased and the family. The current debate about assisted suicide and euthanasia is a serious concern morally and spiritually.  All in all, we can say, “Death has lost its sting. ”

Let me go back to the beginning.  Most of the spiritual traditions put those concerns as longevity and avoidance of death, at the centre of their faith. Why was the belief in life after death (or eternal life) so universally important in many religions?  And make faith the solution to them?  It is because death use to be so ubiquitous and life so short.  Many new born infants and their mothers died.  If they survived the birth, they died of illness and violence, if not mal-nutrition and starvation, before they reached the age 50.  Death was everywhere.  It was the end.   It represented despair and hopelessness.  It is hell: in fact death and hell are the same one word in Hebrew language.  Therefore, giving an end to death was an ultimate blessing and salvation.  Is it still so when some people began to live too long and are so tired to keep going?

So what is the meaning of resurrection today?  Why should it be so important?  What does the Bible really say about death and resurrection?  I suggest looking at some passages to find the answer to the question: “Is the Bible speaking about resurrection as coming back to physical life after death? or is it speaking about an overwhelming sense of the presence of a person who is  dead?”  In other words, “Did Christ walked among people physically alive or was he a ghost?”  My answer is the latter.  That is how I view resurrection: the overwhelming sense of presence of a dead person.  Many who had followed Jesus Christ  felt the presence of Jesus Christ so strongly that they felt He was there alive, but in actuality he was not there physically.

Th earliest account of an incident beyond death and back to life is the story of dry bones coming back into life in the Prophet Ezekiel 37.  This is obviously a metaphor, a vision of hope beyond hopelessness.  It is about the fate of the Kingdom of Israel which was hopelessly like dead dried up bones.  They come back to life with muscles and sinews when the word of God was spoken to them.  I believe the central message of Easter was established in this story.

In all of the resurrection stories, Jesus the risen Christ appears and disappears from and into thin air, goes through a locked door, appeared to 500 people at the same time, and said, “You can not touch me. ” to Mary.  He was in a different body.  True, he told Thomas to touch his wound.  But that didn’t happen: Thomas didn’t actually took the offer.  He was overcome by the feeling of his presence and only said, “My Lord, my God.”  Risen Christ had barbecued fish for breakfast with Peter on a beach.  But we all do that with the dead ancestors in Japan during the Obon festival and remember Grandma and her delicious cooking, for example.  In the end Paul claimed that on the way to Damascus he appeared to him too, who struck him off the horse and made him temporarily blind.  That was a few years after the Easter.

No Jesus did not come back into a physical body.  All who met Christ on and after Easter had a powerful sense of his presence and for whom death became meaningless.  The meaning of Easter is:  Power of faith in Jesus the Christ does not allow hopelessness.  There is alway hope.  Easter is for me still the most important event worthy to celebrate every Sunday.  Sunday for me is not Sabbath, it is a celebration of hope beyond hopelessness,