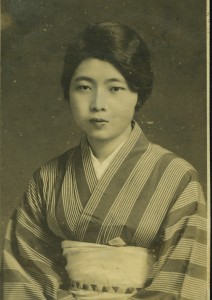 Natsuno Mitsui was born in 1907, on June 25 (Year 40 of the Emperor Meiji’s reign) in Shinsen, Shibuya district in the city of Tokyo as the first child of Yukichi and Takeko, and died on Christmas Eve of 2003 at Griffith-McConnell Residence, the United Church of Canada Home for Elderly Persons in Cote St. Luc in Montreal, Quebec. Early morning, she breathed the last breath holding a hand of the cleaning lady who happened to be there. She was 96 years old.

“Mitsui” was Takeko’s name before marriage. Because her two brothers died during Ruso-Japan War of the early twentieth century, the first born daughter, Natsuno was adopted by Toshiko, the surviving matriarch of the family and mother of Takeko to continue “Mitsui” name. Toshiko was a devoted Christian. So, in order to continue Christian tradition of the Mitsui family, she arranged Natsuno’s marriage with a Christian when Natsuno was still very young. By the time an engagement was publicly announced Natsuno’s would-be husband already changed his surname to Mitsui.

Natsuno went to the highschool for girls at Aoyama Gakuin – a comprehensive educational institution established by American Methodists. After graduating highschool, she was trained as a kindergarten teacher at Toyo Eiwa School for Girls founded by Canadian Methodists. During those days, the Mitsuis were a well to do family, who owned many properties near the center of Tokyo – Shibuya district. As Toshiko Mitsui grew old, not only adopted daughter Natsuno but also the whole family Takeda moved into the Mitsui property to look after the aging matriarch and to manage the property. However, because Natsuno was a Mitsui and the legal heiress of the estate, though she lived with her own fresh and blood, while Toshiko was alive, she was treated differently from her siblings. She was the only one who went on to do post-secondary education (rare during those days for a girl,) and was sent to learn piano and singing, flower arrangement, etc. as a young woman of a wealthy family. She was spared from chores like cooking and cleaning like her sisters. I remember my father excusing mother’s lack of skills in the kitchen saying, “Mama was brought up like a princess.” There should not have been any problem if she married the fiancé of the same class arranged by the matriarch. The complication was that she fell in love with a poor Theology student who came to the family as a tutor for her sisters.

For the matriarch Toshiko, because keeping Christian tradition was very important for her, giving up a wealthy fiancé she had chosen for a poor theology student who was a love in Natsuno’s life was not a huge problem. Her concern was if Natsuno could cope with a life in a manse and of poverty without any servant. My father Isamu married Natsuno after his ordination in 1931 and was adopted by Toshiko as well. His first pastorate was in Numazu. Next year, first child – a son was born: it was me, and the year after my sister Taeko was born. During those years in Numazu, Toshiko often spent time with my family in a manse, and paid for servants – a maid, a nanny, and a house boy. I remember the maid and the nanny who often carried me on her back. But such life style did not last long.

After Toshiko’s death, Grandfather Takeda (Yukichi) failed miserably in his enterprises and lost all Mistui fortune. So my mother lost all domestic help, and had to learn to cook, clean the house, and to do the laundry. She never got the hang of any of them. One of the childhood bitter memories was my aunts making fun of my mother for her clumsy housekeeping skills. I also remember that mother was always doing dishes when grandmother and/or aunts were around. She used to say that she didn’t like cooking and rather be doing dishes. We lived in a chaotic house, and ate drab meals most of the time. Our house became clean and orderly, and ate good food when Grandmother and/or aunts were around, which was quite often. That was because great grandmother, Toshiko, told them to help Natsuno as much as possible.

Meanwhile, our house – manse was always full of people. Often, they were more often than not young people who seemed to enjoy just hanging around. Table was always full of people. It seemed to me that those young people liked to be together at the manse spending endless hours chatting, playing games, wrestling sumo, or singing together with mama’s organ, etc. This life-style continued even though our family’s size increased with the addition of my two more younger sisters, Junko and Toshiko (a.k.a. Kokko) until my father’s untimely passing. I grew up assuming that a pastor’s home was like that. My mother’s less than perfect house keeping skills did not seem to bother my father. That could be the reason why mother was the most suitable partner for my father, because she enjoyed the company of people.

After the WW II, we lived in the half burned church – a shell of a building. But that didn’t deter many young people to congregate in the living quarters of the minister. Some among them later became ministers of the church. Others have become important members of churches. Downtown Tokyo was full of homeless people, and a few of them joined the crowd at the manse. There was a man named Mr. Toyota, who was picked up by my father on the street one winter, when he was suffering pneumonia. He became a resident cook and handy man around the household. He died a few years later. There was a man who was released from prison and joined us briefly. He was a member of a criminal gang and went to prison for murder. He became a Christian and hang arpound our home for a while. When one of the regulars stepped on the Bible which happened to be on the floor, he grabbed my friend by the neck and shouted, “Apologize or I’ll kill you.” Obviously he was a bit deranged. My friend later became a physician.

Father might have thought he was doing anything extraordinary, but all the work to looked after those people fell on mother. She fed them, took cared of their lice filled rag of clothes, spent time with them so long as they stayed around our home, while father was busy doing what his work required of him. She was never a house keeper, but she loved people and enjoyed their company. So though she grew up like a princess not knowing exactly what a woman was supposed to do in a home, she was a good minister’s wife according to a traditional old fashioned role of a”minister’s wife.” At least that was what father must have thought.

One wonders how such a life-style was possible with a meager minister’s salary. This was how. When father died suddenly, we were horrified to find that father had debts all over the place in downtown Ginza. Father owed so much to Kawakami Tamio Law Firm, Hakuhodo Advertising Agency, for example. My parents must have believed that God would provide. When mother and I went around asking them to delay repayment, most of creditors told us that all was forgiven because it was all for God’s work.

In her nineties, she lost almost all her memories, often she didn’t know who I was. She spent the last twelve years of her life in an United Church of Canada residence for Seniors in Cote-St-Luc in Quebec. But she was always smiling and friendly to everyone. She wanted to shake hands with anyone who passed by. She was always happy, so much so that the women who came to visit mother regularly from Howick United Church (my last pastoral charge) said, “Visiting mama made us feel happy every time.” On Christmas Eve in 2003, a cleaning lady who came to sweep the floor of my mother’s room found her smiling at her as usual. She wanted to hold her hand as usual. But she didn’t let go of the hand a few minutes later. It was only when the cleaning lady tried to get her hand loose, she found mother already in another world still smiling.  She was ninety-six years old.  Her ashes were devided into two.  One part went back to Japan and was burried at Ginza Church Cemetery in Tokyo with her husband – my father.  The other part is now burried with my ancesters in St. Louis-de-Ginzague United Church Cemetery in Quebec.