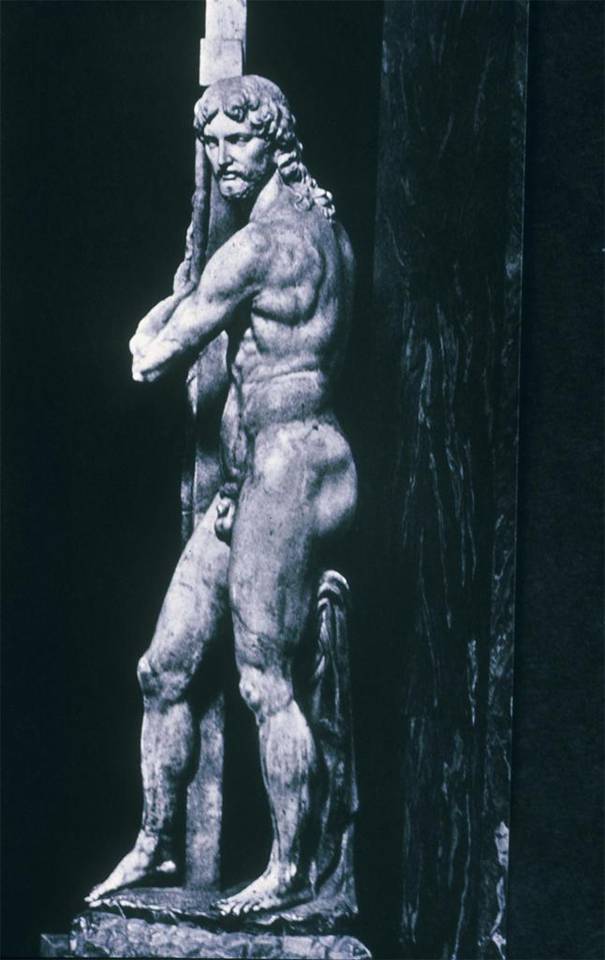 Religions bear a lot of responsibility in arousing and perpetuating racism, including anti-Semitism.  I want to examine Renaissance religious art that exposes the Christian church’s latent but profound anti-Semitism.  Why?  It is very important for me as an active advocate of  human rights.   It has been my experience that  as soon as you begin to speak about the human rights record of the  State of Israel , you are dismissed as an anti-Semite.  It is ridiculous to label me as such.  My grand daughters are half Jewish, and a half of my daughter’s relations are Jewish.  I continue my work in the effort to stamp out racism in all forms particularly Anti-Semitism, in order to continue my advocacy for universal human rights without being accused of holding a double standard.

At the outset, however, I must acknowledge with gratitude, help and encouragement I received from two professors of the U of L in this enquiry.  Anne Dymond, a professor of Art History, who encouraged me to pursue the subject, and Mary Kavanagh, Chair of the Department of Art, who introduced me to Leo Steinberg’s work.  Steinberg was a professor at the University of Pennsylvania and in 1983  published a book called “The Sexuality of Christ in Renaissance Art and in Modern Oblivion”.
My query began when I sat in an art history class for two semesters at the University of Lethbridge.  While going through the Renaissance period, I was struck by two odd things about naked bodies of the Biblical characters.  (Fig. 1, 2,3 – Michelangelo)  First of all, they are all male figures.  There are undraped females in Renaissance art, but they are pagan figures like Venus.  Secondly, though they represent  Jewish males, they are not circumcised.  It was not that difficult for me to interpret this as a mark of male chauvinism and anti-Semitism in the Christian Church, which commissioned those artistic works.  I realized then how deep and entrenched the church held those views and influenced generations of racist practices and misogyny, especially against the Jews.

There is a book written by Barrie Wilson, who teaches religion at York University in Toronto, titled “How Jesus became Christian.”  He examines the process in which a movement within Judaism in Palestine became another religion, no longer Judaism.   During the first century, a man called Joshua or Yeshua in Hebrew became Iesus in Greek, Jesus in English, in the new religion.  And Messiah or Messhiah in Hebrew also became Xristus in Greek, Christ in English.   A few centuries following, the selection of the books that became the present day Christian Bible, was canonized by the church in AD 393 at the Synod of Hippo, at the time when the church was eager to erase as much traces of Jewishness as possible.  This is why, Wilson contends, that the New Testament itself is inherently anti-Semitic, particularly Luke, Acts, and Paul’s letters.  The New Testament is where the notion of the Jews being murderers of Christ came from.   It was an official doctrine of the Roman Catholic Church until Vatican Council II, which was held during the 1960’s.  The Church took 350 years to admit that the church was wrong and Galileo was right, but two thousand years to admit that the Jews could not be blamed for the murder of Jesus.
Let me go back to the subject of art.  In the Art History class, I was surprised when I first saw Michelangelo’s Risen Christ.  (Slide 2 and 3) I was not surprised to see Jesus in a naked male body.  Michelangelo did many nude figures, including the most famous David in Florence. (Slide 1).  My amazement was seeing a Jewish male not circumcised.  The Book of Genesis 17 indicates how important circumcision was as a mark of a special relationship between God and the Israelites.  Every Jewish male child is circumcised after eight days of birth even today.  (So is a Muslim baby.  Arabs and Jews are the children of Abraham.)  How can anyone deny that Jesus was circumcised? (Slide – Circumcision by Mantegna)
I looked at other Renaissance religious art and ventured into some speculations.  I made a quick survey of artists who painted Mother and Child, (Slides 3, and next few slides of Mother and Child are by Botticelli, Bruegel and others)   Note Mary’s hand.  It is drawing the attention of the viewers to the child’s genitals and you will see the same problems: emphasis on maleness and rejection of Jewishness.  Some people defend those artists.  Their argument is:  Renaissance was a movement to revive the ancient Greco/Roman culture.  Greeks didn’t think that a female body was as perfect as a male body, so there are few female nudes.  Also the Greeks were not circumcised, they never saw circumcised genitals and didn’t know how they looked like.  Therefore Renaissance artists, so the argument goes,  did what the Greeks did.   I don’t accept such an argument.

Renaissance people  certainly must have known how a circumcised penis looked like.  Many North African slaves lived among them in Europe and surely exposed their bodies dead or alive.  They were Muslims and were certainly circumcised.  The depiction of the Biblical males not circumcised was an explicit rejection of an important sign of the covenant between God and the offspring of Abraham – Jews and Arabs.  The Church and the artists certainly knew that Jesus was circumcised.  (Slide 4 – Circumcision by Montegna) But the church tried to distance itself from Judaism by instructing the artists to eradicate the sign of a special relationship between God and the sons of Abraham.  The process of de-Judaisation began with Paul, who determined that Baptism alone was enough to enter the church.  Circumcision was dismissed as optional.  An early Christian theologian, Tertullian said, “the faith has turned away from circumcision back to the integrity of the flesh, as it was from the beginning.”   Origine and Augustine and many other fathers of Christian thought followed the same argument.  Leo Steinberg concludes, “The reason for the Child’s (and other Biblical figures’) apparent uncircumcision must lie in the artists’ (and the church’s) sense of the body’s perfection.”  Jesus, the Son of God, can not be imperfect.  Jews can not be perfect human because of circumcision?  This is how the church rejected Jewishness of Jesus.  Son of God must be without a shameful scar, or an embarrassing defect as these church fathers  called it.
Another telling feature of Mother and
Child in Renaissance art is the scene depicting the Magi paying homage to the Holy Child.   It is the scene of Epiphany, revelation of the son of God to the pagan world, represented by the Magi, who came from the East.  A close look at them, it is easy to see what the Magi is looking at. The Magi is clearly showing that they are staring at Baby’s genital.  The Magi represented the pagan world,  therefore they must be told in no uncertain terms that the true God is a male.

I come from the East.  So I know how much female divinities   can be popular figures in other cultures.  For example, the one who gave birth to the Japanese archipelago was a goddess, Izanami, and a    mystic figure who was supposed to be the founder of the Japanese nation is a goddess, the Sun Goddess of Amaterasu.  Therefore the moment of Epiphany when the Magi came to visit the child is not only a demonstration to the pagans who the true son of the true God was, but also he was a “HE”, a male person.  Therefore, the Magi must see with his own eyes that Jesus, a new born son of God was a boy.  It is no wonder that male-chauvinism is well entrenched in the Christian Church, even though things are changing in some churches.

If you think that I am picking only on the Catholic Church, you are quite wrong.  Read Martin Luther, the first Protestant reformer.  His tirade against the Jews was venomous: in 1543, he wrote “Jews are base, whoring people, that is, no people of God, and their boast of lineage, circumcision, and law must be accounted of filth – devil’s faeces.”  The K.K.K. began as  a Protestant movement, and it’s mission is anti-Semitism, racism, and anti-Catholicism.  I personally encountered people who said, “the mark of Cain” was a Biblical basis to exclude non-white races as referred to in the Chapter 4 of the Book of Genesis, by Protestant people in Canada and South Africa.

Yes, religions have a lot to answer for taking advantage of racism.  You may ask me, “Are you still a Christian?”  And I say emphatically, “Yes, I am.”  I believe that religion is an important instrument in our pursuit of truth.  It is as much a legitimate channel as art, philosophy, and science.  However, all human effort to find what is true can be abused in a pursuits of power and domination.  By striving for power instead of truth, we can go against truth.  This is how any religion can become evil by twisting the truth and excluding and demonizing others in order to glorify itself beyond and against what is truth.  This is why I am keen to expose past mistakes in my own faith tradition in order to strive towards what is truly true.

2 thoughts on “Penis of Jesus – When Jesus became Christian, did he cease to be a Jew?”