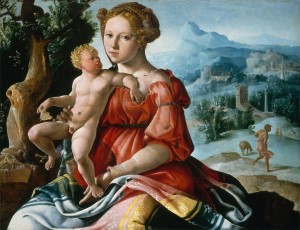 I don’t believe the birth of Jesus actually happened literally in the way the Gospels Matthew and Luke described it.  However, I believe t is important for all of us to think seriously about the meaning of Virgin Mary giving birth to our Lord.  The story of virgin birth has a lot deeper meaning beyond a mere miraculous event which is a biological and physical impossibility.  Therefore, the story of virgin birth is a myth that tells important truth.  Myth is not untruth.  We create myths when words fail to convey profound truth.  Thus it had to be told in fictions or stories based on the facts but that are embellished to make a point.  Virgin birth is such a case.

Mary, the mother of Jesus, is a relatively insignificant presence in the New Testament.  The Islamic Kor’an mentions her more often than the Christian Bible.  The account of virgin birth appears only in two books, Matthew and Luke.  The Gospels Mark and John completely ignore it, so do Paul and other Apostles.  Gospels were written mainly to tell the story of Jesus’ suffering, death, and resurrection.  I believe the birth story itself is a fabrication of early Christians who lived outside of Palestine among pagans.

They needed to affirm their faith in Jesus the Messiah,about his Jewish roots and a role played by a humble young woman.  They were trying to emphasize the importanceof Jesus as a Jew and the Messiah by creating a myth as described in Matthew and Luke.  Therefore they were merely trying to enhance his mother’s status as someone special, be emulating the stories of the birth of Samuel and Isaiah’s prediction of the birth of Messaih by a young woman (7:14).  However, I do believe that those two points,  Jewish Jesus and his unmarried teenage mother, convey a very important message for us in the Twenty-first Century.  This is why I believe in the significance of what the story of virgin birth conveys, though it is not as a historical fact.  The writers’ intention was very important for us to recognize.  So what were they trying to say when they decided to fabricate the story of virgin birth?

To begin with, I should point out a serious problem in the story as the Matthew and Luke describe.  Both begin to tell the life of Jesus with genealogy leading starting with Adam and Eve (in case of Luke) and Abraham and Sarah (Matthew), in order to emphasize the importance of Joseph’s status as the descendant of King David so Jesus could be a ligitimate Messiah.  If Jesus had to be connected to David, why should it be Joseph’s ancestry, not Mary’s?  The virgin birth story means Jesus is not the son of Joseph.  He is the result of union of Mary and the Holy Spirit.  So, Jesus could not have been a descendant of King David, if he was not a son of Joseph.  Weren’t the writers of both Gospels aware of the problem?  I believe that they were not thinking about Mary being a virgin but a mere young girl.

In fact, the notion of “virgin” giving birth to a special child appears first time inh Isaiah 7:14.  “Behold a virgin will conceive and bear a son.”  Here, the word translated as “virgin” comes from Greek translation of  the word Hebrew “alma”  which merely means “Young woman” not necessarily a virgin.  When the Hebrew Bible was translated into Greek to accomodate Greek speaking Jewish diaspora, the idea that a woman becomes a not-so-pure when she has lost virginity was wide spread in the Greek speaking Mediteranean world.  Which was contrary to the traditional Hebrew idea of the beauty of sex as is found in the Song of Songs.  So in the Greek translation of the Old Testament used the word “parhenos” meaning clearly “virgin” who is not contaminated by sexual intercourse.  That suited the thinking of the Church which became the established state church, that needed to bainish any thought of a woman being “mother of God” who is contaminated by filthy  act of sex.

By then, the Church needed to establish Jesus as God, not merely the Messiah, the annointed one.  King David was a messiah, so was a Persian King Cyrus who liberated Hebrews from Babylonian captivity.  The creeds that affirms Jesus Christ as God, Nicean Creed and later Apostle’s Creed were authorized by a Roman Emperor who needed to unify his empire.  Nothing less than God could do that.  So Jesus Christ as one with God, being one person of Trinity.  Consequently Mary, who becomes Mother of God, had to be a virgin despite all sorts of contraditions.

It is interesting to speculate that, before Christian Church became the State religion, early Christian added the birth story as they did in two Gospels.  Why was it so importnat to recognize Jesus as  Jewish rabbi born of a very young mother, probably between ages of 14 – 16, whose pregnanvy was rather questionable?  What did they have in mind?  It is incumbent for us to recognize our Jewish religious roots, and respect for a human being despite a humble beginning.

It is interesting to speculate, before the Christian Church became a state religion of the Empire, why early Christians added the birth story as they did.  Why was it important to recognaize that Jesus was a popular Jewish Rabbi (teacher), whom people started call Mssiah, a saviour of the Jewish nation?  Jesus Christ as one person of the Trinity came later.  Furthermore he was born of a young mother, probably a mere teenager, who became pregnant under a suspicious cercumstance.  Why did they have to write the life of the founder of their religion like that?

It is important for us to think seriously the Jewish roots of our faith, and the respect we have to accord to a humble person, an unmarried pregnant teenager.  Think what the song of Mary Luke 1: 46 -55.