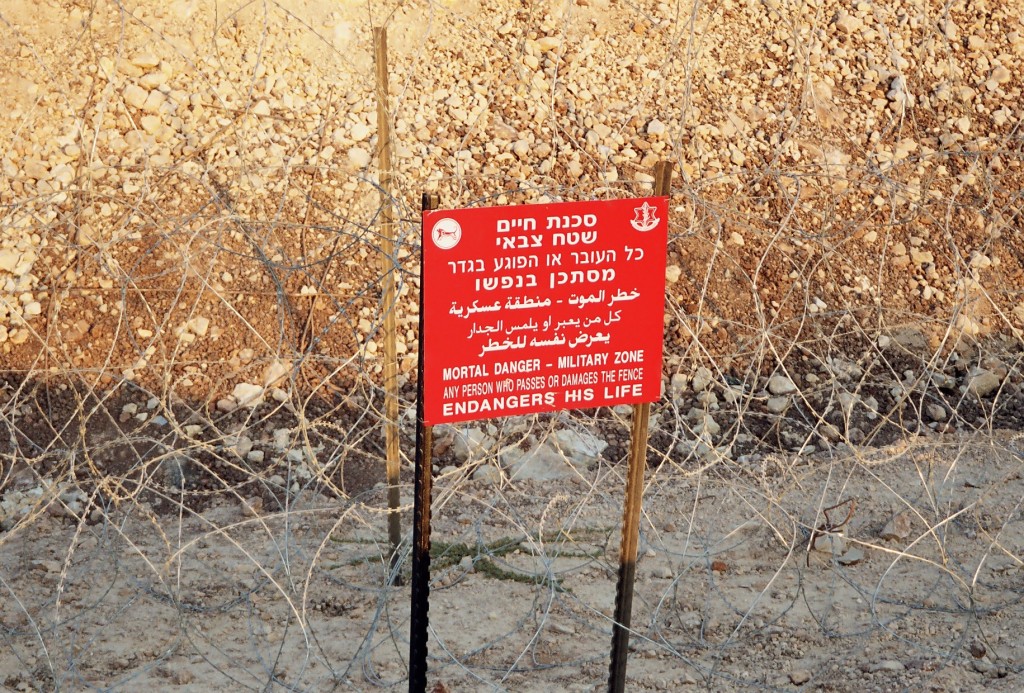 The powder keg that is Jayyous showed some signs of igniting recently when the gates that are supposed to allow farmers access to their fields remained closed through the Yom Kippur holiday and beyond. The gates were originally supposed to be reopened on the Tuesday following the end of Yom Kippur but that never happened. Instead, farmers were left to contemplate another lost day in their olive harvest, the life blood of this community.

The farmers were all ready to go harvesting in order to recover the lost four days following Yom Kippur. The soldiers came, but they didn”t open the gate. The already tense situation became even more volatile as the angry farmers demanded the right to make a living. One young man became so enraged that after the soldiers left he started to shake the gate. An old man stopped him so that cooler minds prevailed this time.

The Tuesday after Yom Kippur was supposed to be a big day, a solidarity day with the Palestinian farmers. Many Israeli and international peace activists were planning to join the farmers to pick olives, including from those trees near the settlements. Israeli peace organizations such as Rabbis for Human Rights, Women in Black and many other solidarity groups from other parts of the world were coming to help in the all-important harvest. Many of my fellow Ecumenical Accompaniers (EAs) from all over Israel and Palestine came to Jayyous to join in solidarity. We had an almost party-like atmosphere at our house the night before with wall-to-wall people sleeping everywhere. I cooked ratatouille–the best from my repertoire–for 12 people.

The following day, Wednesday October 8th, fellow EA Anna and I went to the south gate at 7 a.m. I was concerned about the school children whose home unfortunately is located on the wrong side of the fence. A jeep came by but didn”t stop–an ominous sign. There were two young mothers, three babies between them, who were standing on the side. They were from Jordan, visiting relatives in Jayyous and on their way home. They had a taxi waiting for them but they couldn”t get to it because of the closed gate. They were on the verge of tears but then they did the unthinkable. They started to climb the fence while wearing traditional Muslim attire. I couldn”t believe my eyes. Many men rushed to help them. Even I wouldn”t do that–going over the fence with barbed wire and all, and I wear pants. They went over one by one, then the babies were brought over, and finally five heavy suitcases–all over the fence. Desperation will cause people to do things they wouldn”t consider under ordinary circumstances. I was immobile watching the whole scene while Anna went to help the women climbing down the fence. I broke out in cold sweat, not so much because of the danger of climbing up and down the fence but because of the soldiers. They are under orders to shoot those who would climb over the fence and they can show up at any time. Fortunately they managed to complete the long process before the soldiers returned. What a relief!

We waited, and waited as the sun moved higher in the sky and the temperature, both literally and figuratively, grew hotter and hotter. The children gave up and went home, losing yet another day of school with no end in sight. Some people sat down in the shade of the nearest olive trees. There were 20 farmers and eight donkeys. A woman in traditional black Palestinian clothes brought me a cup of strong Arab coffee. “Shukran! Thank you,” I said. “The best coffee in the world!” In the shade of a tree, Mohammed, one of the farmers, told me that he lost about 150 trees when the fence was constructed. They just came, took the land, and uprooted centuries-old trees, he said. Olive trees are a symbol of life here, of belonging to the land–almost sacred. He has lost about a third of his possessions.

I received a phone call, which I asked Mohammed to translate to the others there. The situation at the north gate finally boiled over as farmers broke the lock and walked to the other side, international activists joining them. Most of our colleagues were also at the north gate. With that action, any hope of the south gate opening was dashed. Mohammed wanted international people to come to the south gate as well so they could do the same thing. But there was no one left, just Anna and me. Anna agreed to walk the 40 minutes down to the north gate to see what could be done.

Anna phoned and informed me that the incapacitated north gate would remain open until 6 p.m. So it seemed that it would be possible for farmers to get to their fields, if they could get to the north gate. The farmers with me were infuriated. “Our trees are right here,” they said.

Gaining access to their own land would require a 40-minute walk to the north gate and then another 40-minute walk back to their trees; a trip that would take a few minutes had it not been for the fence. Instead of moving to the north gate, they started to shake the south gate violently until it broke wide open. But as soon as it broke open, they got scared and quickly moved away. By the time the soldiers came around, there was nobody there except me. I tried to talk to the soldiers, but they completely ignored my presence. They calmly took a heavy chain out of the jeep and tied the gate with it, padlocked it, and went away. I thought that any hope of the gate opening anytime soon was gone.

But the farmers came back, one by one, with their donkeys. About half of the original men and women returned. Mohammed asked me again if internationals would come to accompany them to other side. I phoned a person from another international organization, and waited. At about 10 a.m., Anna phoned to inform me that there was a complete closure of all gates and check points in the District of Qalquilia, of which Jayyous is a part, for 10 days. The area had been declared a “military zone” on the spot. The people of Jayyous would be prisoners in their own village with no ability to go to work. I asked Mohammed to relay the information to the people, which he did. Women started to cry before heading home. On the way back to the house, one of the younger farmers said in his halting English, “We will break it tonight.” I didn”t have the nerve to say, “Don”t do it.” I knew very well that it would be very unwise to do such a thing–break open the gate. There could be severe retaliation on the part of the military and the whole community would suffer.

Helicopters were buzzing overhead following the holiday of Yom Kippur. I wondered what their purpose was. Was all this in retaliation for the suicide bombing in Haifa? Would punishing the farmers of Jayyous bring the dead back? Abdul, another of the farmers, gave me a ride back home on his donkey, the poor beast carrying two men on its back. But it sure was nice to have a ride, after a morning under the hot, scorching sun. There had been quite a bit of unwanted excitement but my mind was dark with a foreboding sense of doom.