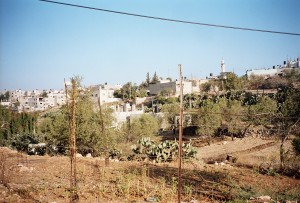 On my last day in Jayyous, I went to the South gate to make sure that the Bedouin family had gone home. Yes, they had. The Israeli Defense Force soldiers came on time and opened the gate for them. None of us had to wait long in the hot sun with the hunger and thirst pangs of the midday of Ramadan. But Mustafa** rushed out to make sure he would not miss the excitement. He is only seven–a cute little boy. But for a while I had dreaded running into him at the gate.

Ever since the computer game called “UABE — the Gate” hit the local Internet Café, young boys increasingly became the source of our dread and fear. Some enterprising computer programmer designed a game about the separation fence and the gates. The game simulates a battle between Israeli soldiers and stone throwing teenage boys trying to kill each other. One evening at the gate opening, we found ourselves having to disarm a bunch of young boys who had stones in their hands. Either they didn”t know that they could be shot or they were too young to know what ”being shot” meant. We had to ask the mayor for older persons to be at the gate every time it was opened, and to accompany us when we did the gate watch to prevent the young boys playing games in the real and deadly situation. A few evenings before I had to grab Mustafa and tear a stone out of his little hand. He looked at me with hate-filled eyes and said, “Shalom” — a bad signal, addressing me like he would to an Israeli soldier. Happily, we became friends in a few days after his big brother started to come to make sure the little one behaved. We even had tea at his home one evening. So on this day, when I said “Mas Salaame — Good-bye,” he made peace signs with both hands and gave me a big smile. Or could it be that he was saying, “Victory” like Winston Churchill during the Second World War?
Things got worse after I left Jayyous. I was in Jerusalem preparing to go back to Canada when I heard that the day after I left, the South gate was never opened in the afternoon. The Bedouin family waited all afternoon and all evening for soldiers to open the gate. No soldier came. One village family took the four kids and the mother in and gave them their first liquid and solid food since sunrise. It was Ramadan. Nobody eats or drink between sunrise and sunset. They slept in the home of the kind family and went home the next morning when the gate was at last opened, totally exhausted. Of course, kids missed school.

Now I”m home in Lethbridge in Canada, safe and sound. I came back with a touch of chest cold I picked up in Jerusalem but nothing serious. It”s so beautiful here. The air is crisp, the sky is so high, and deer roam in the snow in the coulees. Crab apples and chokecherries have been made into jelly ready to adorn toast. Yum! People are animated about increasing electricity rates and same sex marriage, Paul Martin is waiting to be anointed as Prime Minister and the union between the Alliance and PC is a fait accompli. I”m sure they are important–but please save me from peaceful boredom. Peace is hard to take. The life at the gate, on the other hand, is about waiting, a lot of it, but is far from boring. Waiting for soldiers is about anxiety and frustration. Anger builds up as we wait. It sometimes explodes.

I heard a few days after I came back from Sebastien that the South gate in Jayyous is indefinitely closed. Sebastien is a young Swiss theologian from Neuchatel working with children suffering post-traumatic-stress-syndrome. He came to live with us for a week and watched the South gate with me. He also picked olives with Abdul Karim†. He was the man who once gave me a ride on his donkey. Sebastien and Abdul Karim became best of friends. Now he tells me that the gate is closed for good and Abdul Karim could not go to his field unless he walks one and a half hours through the North gate to the field he could see right in front of the gate. Why? Did any boy throw stones? Were the gate and the fence vandalized again? What is Mohammed† going to do? His field was divided into two because of the fence while losing acres of his land for fence construction. The Israeli District Commander promised that his land would be returned when the fence became redundant. Sure, in the next millennium? I feel so helpless. Sebastien also wrote to me about an old man who never spoke to me. He waited days on end for the gate opening. The Bedouin mother saw him sitting by the gate on the other side of the fence, and asked him what he was doing. He said, “I have to speak to my trees.” His family had those olive trees for centuries, everybody spoke to the trees everyday as though speaking to the ancestors. So the brave woman stopped an IDF jeep and demanded that the soldiers let the man through so he could speak to the trees. The soldiers just laughed and went on.

I know that I don”t belong to Palestine and have to let go of it and go on with my life. After all, it”s the struggle for Israelis and Palestinians to resolve by themselves. So many US Presidents got involved. But where are their “Peace Plans” now? The Geneva Accord, though not an official agreement, gives us a glimmer of hope. But how long do they have to suffer? Do I have any right to tell them to wait?

When I first went to Israel and Palestine in 1979, I thought things could never be any worse. It will explode soon, I thought. Settlements built by the Israelis were in their beginning stage. Scholars theorized that the settler population would reach 100,000 soon. That would be the benchmark to indicate an irreversible permanent annexation of Palestine by the State of Israel. Now there are more than 200,000 settlers. Some of the settlements are so old and well established that the residents don”t realize that they live on the illegally occupied lands. They are simply called “communities.” The Jordan Valley does not resemble the Palestine I used to know at all. It looks like California with totally commercialized mechanized corporate farming. The whole of the West Bank is divided by highways connecting settlements, ignoring and cutting off roads connecting Palestinian towns and villages. It is now much worse than in 1979.

For 20 years, Palestinian friends have told us to work on government policy and public opinion in Canada. So, I went to Ottawa with briefs, asked our colleagues who went to the UN Human Rights Commission in Geneva to support our briefs. I traveled with a Rabbi from the Canadian Jewish Congress to Israel and the Occupied Territories so we both could see what others” views were based on. And we did many other things for the cause of peace. We were happy to see Manahem Begin shaking hands with Anwar Sadat in front of a smiling Jimmy Carter, or Itzak Rabin with Yasser Arafat, in front of Bill Clinton, and other presidents and the shaking hands of Israeli and Palestinian leaders. Did things get better? No, they got worse. The bloody Intifada of the eighties didn”t produce anything positive. And this time, the second Intifada and the Israeli response have been more bloody. It looks hopeless, as many friends agree. Political leadership on both sides lacks vision, and perhaps is corrupt. They speak about peace in unison but the word sounds so hollow. Do I still hope for peace? I had given up. I wanted to get away from all this and start enjoying my quiet retirement.

Then I was sent to Jayyous thanks to some creative persons in the United Church House. Or perhaps they were mad? Who would think of sending someone old and retired like me to be the first participant from Canada in a brand-new program, which nobody is quite sure how it would work? I am immensely grateful for that creativity, madness or not, because I regained faith and hope for the future. No, I didn”t see any new policy initiative. The leadership on both sides is just as bloody minded and is bankrupt of policy initiative and of vision. But I lived with Palestinians and Israelis. They love life, love to be let to live and to be loved. They have the same aspirations to good life, family and friends. They don”t mind hard work so long as they can eat the fruits of their labour. They don”t want their children to die and want to live long lives as God allows. Like the cliché, they are like us. Yes, they are easily led by demagogues and propaganda, and are afraid of and hostile to the other party. But I saw them: when peace loving Israelis come face to face with Palestinian villagers to pick olives they saw human faces in the others. Even some soldiers, confronted by suffering of children and women, cried and apologized for having to obey orders. There and then I saw a glimmer of hope. Now I have faith. The Lord will come. Peace will come, God willing — Inshaala. Goodbye Jayyous till we meet again. Peace, Shalom, Salaame!