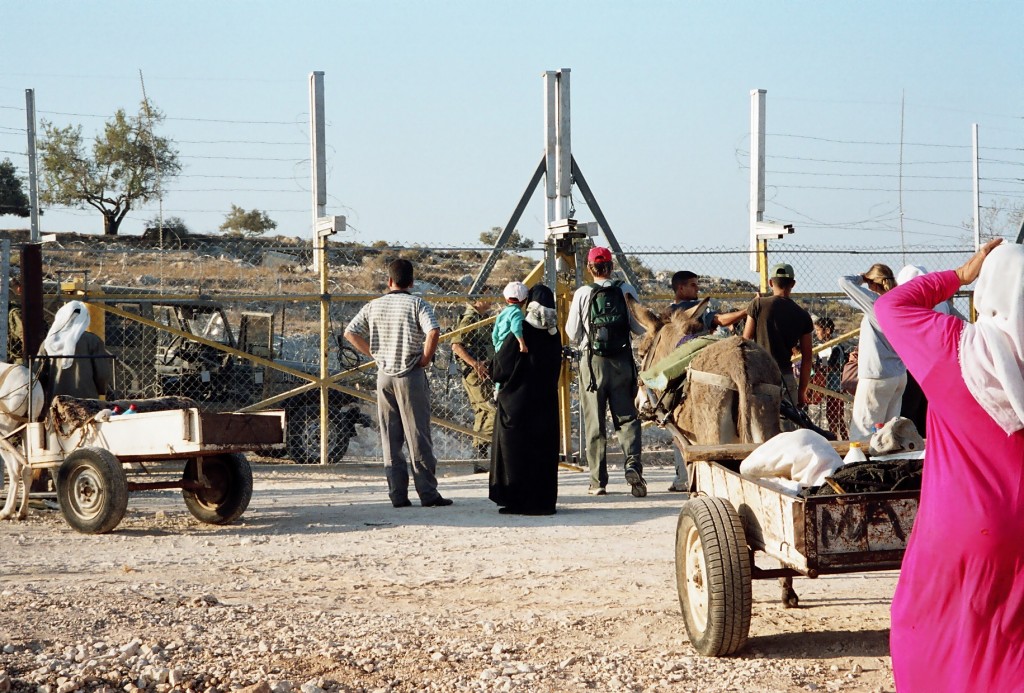 Life at the gates of Israel”s so-called “separation fence” is a life of waiting in Jayyous. As accompaniers, we wait for long periods until soldiers arrive to let the Palestinians cross. Accompanying at the gate means waiting with the farmers and the school children. When Iwas a seminary student, I read a sermon by Paul Tillich in which he used waiting as a metaphor for faith. In our culture, however, we put value on speed and technology, giving the concept of waiting a negative connotation. But in Samuel Becket”s play Waiting for Godot, some profound truths about the human condition are explored through the vehicle of waiting. Psalmists sung about our faith as “waiting patiently for our God.”

During the last few weeks, I have noticed that the Bedouin girl in Jayyous, who needs to cross the gate every morning to get to school, is showing increased signs of defiance. She sits away from her mother on a rough rock instead of under the cooling shade of an olive tree. She looks at her younger brothers in disdain as they engage in childish fooling around while waiting for the soldiers to arrive. She argues with her mother more often nowadays as she grows impatient during the interminable waits. It”s painful to watch a young girl covered with a hijab and a long dress while sitting in the hot sun waiting for soldiers who can”t keep to their own schedule.

The South gate of Jayyous, where I often do the watch, is the only access to the village for the Bedouin family, which lives on the other side of the fence from the village. The children, a girl and three boys, two of them quite young, have to depend on the Israeli soldiers in order to get to school in the morning and return home in the afternoon. Their mother always accompanies them and spends the day in the village until the children are dismissed from school. She dares not let the younger boys try to make the crossing alone, even though it is a short 10-minute walk. Despite the schedule written on a sign by the gate, more often than not the children are late to school. Sometimes they miss school altogether. It”s not the fault of the family but of the soldiers, who almost never keep to the schedule. I have been told that there is an older boy who some time ago decided to quit school because of the difficulties. I have also been told that they are not doing well in school because of their irregular attendance.

During the many hours of waiting at both gates, some young farmers become so impatient that they resort to reckless behaviour. The younger boys are even worse. When the older villagers see them resorting to destructive acts, they usually stop them. The older residents should know the proper way to behave — they have been living under occupation for a long time. I once saw an old man chasing a man in his thirties with a whip. The younger man was trying to bend the razor wire in frustration over the late arrival of the soldiers. The young boys frequently throw stones at the fence. This behaviour is usually met with severe reprimands from the older men. One of my colleagues met a family with a son in his 30s who is in prison. He has been held without trial since he was 14 years old for throwing stones at soldiers during the first intifada, according to the family. The older men know the futility of throwing stones. But is it worthwhile to be patient and wait? Or should they just give up? Is that what it means to wait?

The Israeli government says that the fence or wall is a temporary measure to stop suicide bombers. Additionally, the government says the land will be returned to the original owners and the barriers will be removed after a political settlement is reached. But if one examines the preceding rationales, it is difficult to find credibility in either. The fence is made in such a way that a child with an ordinary wire cutter can cut a hole large enough for a person to go through. It was said that the fence is “electrified” but, in Jayyous at least, it has never worked; everybody touches it. There are some contraptions that would indicate that it is “motion sensitive.” That has never been true in Jayyous either. I have often seen people climbing over them. In any event, the fence will not stop determined, half-crazed individuals intent on killing themselves and taking the lives of others. To be sure, there are tall concrete walls in Qalquilia and Tulkarem but they are not very long. In short, the barrier will not stop suicide bombers.

As for the claim about the temporary nature of the structure, it would be more believable if it was being built on the pre-1967 green line. The situation begs many questions. Why do some parts of the barrier penetrate deep into the Palestinian territories and surround the settlements? Why, if one looks at the areas around Jayyous, does the barrier separate people from their land, greenhouses, and olive groves? Why does the barrier separate people from their source of water? In the Qalqilia and Tulkarem districts Palestinian farmers now cannot reach their wells. Those two districts contain two of the three most important aquifers in the West Bank. Are these temporary measures? Is it really worthwhile waiting patiently until all the gates are opened and the barriers come down? Is the Bedouin girl unreasonably insolent? Is the old man with the whip right? Should they all still wait? What does the term “wait for God” mean?

I don”t believe that waiting is a mere passive action. I believe that there can be active waiting just as there can be passive resistance. A few days ago, I stumbled very badly and injured my knee, drawing quite a bit of blood. Per Einar, my Norwegian colleague, brought out his first-aid kit and did a professional job dressing the wound. Sure enough, it healed in a very short time. I said to Per Einar, “You performed a miracle.” But Per Einar replied, “No, I just prepared for the miracle.” Surely there can be a lot of preparation when you wait for liberation. I haven”t quite figured out how this active waiting fits into the context of Palestinian liberation yet. But there must be ways to prepare for the arrival of freedom.

When I watched Nelson Mandela walking out of the prison, I thought that I was surely seeing a miracle. I never thought that the liberation of South Africa would ever come in my lifetime, but the miracle did happen. And what a lot of preparation was needed for its arrival! We have faith in God”s agenda. We wait patiently for the Lord.